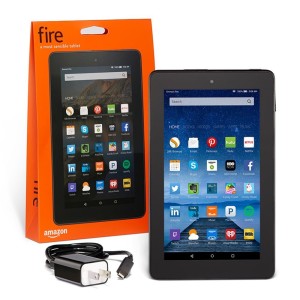 Warning: Root and flash your device at your own risk. I am not responsible when your device becomes unusable.

An Amazon Fire 7″ (2015 release) tablet recently came into my possession. The hardware is good considering the very low price. But I couldn’t stand FireOS, Amazon’s version of Android. It’s uglier. It has fewer features than stock Android. The Amazon Appstore has a worse selection of apps compared to Google Play. And every app on the tablet seems to try to sell you something.

I expelled Amazon from the tablet and installed a fully featured version of Android. It now runs like a dream.

At this point you should be running Cyanogenmod 12.1 with SuperSU for root and Google Apps.

You can easily return to stock FireOS. You may need to do this if something goes wrong when installing Cyanogenmod. Or maybe you like FireOS better.

And now for a random pathology cartoon regarding Leishmania amazonensis amastigotes. 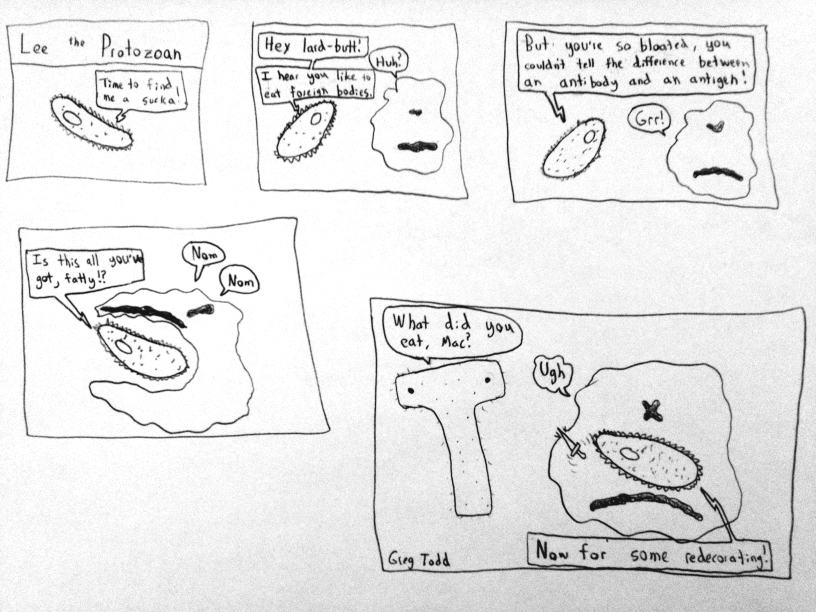 Mike has taken the initiative to upload the code, make some improvements, and prepare a new release. You can download version 1.3.1 now.

I no longer maintain GMinder, so please consider Mike the new lead developer. He has ideas for further improvements. Thanks for volunteering, Mike!

What follows is a generic class for generating CSV files.

I wanted to print the contents of some objects, for debugging purposes. One option was to override my Class’s ToString method and simply use Console.WriteLine(myObject). I do this on a few classes, and suddenly I have to maintain all these ToString methods whenever I change their properties or fields.

All that extra work, just for some debug statements? I think not – I’d rather the computer do the work for me. After all, it always knows what properties my objects have. So I wrote a method for automatically generating a “pretty” snapshot of an object’s state. C# code follows.

We have always pursued innovative projects because we want to drive breakthroughs in computer science that dramatically improve our users’ lives. Last year at Google I/O, when we launched our developer preview of Google Wave, a web app for real time communication and collaboration, it set a high bar for what was possible in a web browser. We showed character-by-character live typing, and the ability to drag-and-drop files from the desktop, even “playback” the history of changes–all within a browser. Developers in the audience stood and cheered. Some even waved their laptops.

We were equally jazzed about Google Wave internally, even though we weren’t quite sure how users would respond to this radically different kind of communication. The use cases we’ve seen show the power of this technology: sharing images and other media in real time; improving spell-checking by understanding not just an individual word, but also the context of each word; and enabling third-party developers to build new tools like consumer gadgets for travel, or robots to check code.

But despite these wins, and numerous loyal fans, Wave has not seen the user adoption we would have liked. We don’t plan to continue developing Wave as a standalone product, but we will maintain the site at least through the end of the year and extend the technology for use in other Google projects. The central parts of the code, as well as the protocols that have driven many of Wave’s innovations, like drag-and-drop and character-by-character live typing, are already available as open source, so customers and partners can continue the innovation we began. In addition, we will work on tools so that users can easily “liberate” their content from Wave.

Wave has taught us a lot, and we are proud of the team for the ways in which they have pushed the boundaries of computer science. We are excited about what they will develop next as we continue to create innovations with the potential to advance technology and the wider web.

I am not surprised. Google Wave never seemed to have a clear purpose. I remember excitedly waiting for an elusive beta invite, only to experience a huge letdown when I finally tried it. The communication that Wave facilitated was confused and restricted to an elite group. So much for reinventing email.

However, I am disappointed. Google put a lot of hype into Wave, then it stagnated and died. I can see the same happening to Google Buzz. It seems like Google is playing it safe – they haven’t made significant changes to many of their apps in a long time: Google Talk, Voice, and Reader are some significant examples. Gmail hasn’t broken new any ground recently. 7.4 GB of email storage? Yawn – Hotmail and Yahoo offer unlimited storage.

I get the feeling that corporate bureaucracy is starting to slow Google down and is making significant changes in flagship products more difficult.

AutoHotkey is capable of disabling the Caps Lock key. AutoHotkey is a tiny program that lets you assign behavior to keystrokes, mouse actions, and more. It is actually very powerful and can run extremely complex scripts, which makes it somewhat intimidating. For these reasons I avoided it, although Lifehacker frequently praised it, until I finally took the plunge. I’ll never go back.

Disabling the Caps Lock key is a one liner. But that seems like such a waste of a key; can’t I do something useful with it? Yes I can!

This script shows my Trillian contact list while I hold Caps Lock and hides it when I release the key. Now with one keystroke I can easily peek to see who is online and return to my work undisturbed. It even launches Trillian if it is not already running. I greatly prefer this to Trillian’s dock/autohide feature because I was always making Trillian pop open when I didn’t mean to.

If you want to use this script, be sure to set the run command to Trillian’s location on your computer, and assign the Hotkey Ctrl+Shift+T to the action “Contact List: Toggle Visible” (this setting is found within Automation in Trillian’s Preferences).

I’m sure this script could be adapted to toggle other programs and Instant Messengers.

Note: This works on three of my computers running Windows 7 and Trillian Astra, but I imagine it would work with Trillian 3 and other versions of Windows.

Several users noticed that GMinder did not correctly display dates and times on their computers. This is because GMinder did not take into account various international time formats. New version 1.2.10 now has better support for such formats, including 24 hour formats. Note that GMinder will now use your regional settings in Windows to format the time.

Additionally, there is a new “About GMinder” window that displays the version of GMinder that you are using, accessible from the system tray.

As always, thank you for your suggestions and feedback!

EDIT: Version 1.2.8 used some faulty logic when deciding if it should ping. It has been quickly replaced by 1.2.9. I apologize for the mistake, please download the new version.

I released a new version (1.2.7) of GMinder today, with the following improvements:

I recommend installing this new version, especially if a previous version had given you trouble.

Thank you for all your suggestions and feedback!